For the Love of a Classmate

Class of ’82 helps beloved classmate with move back to Lincoln, and much more 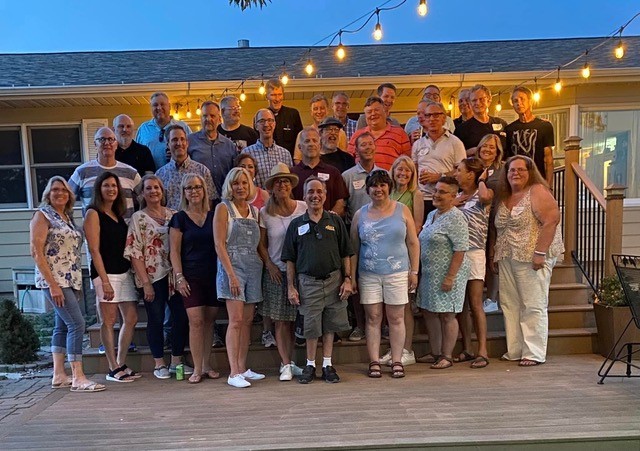 If you were friends with Chris Boland ’82, either at Cathedral or Pius X, you might have occasionally given him a hard time about something. You also would have tried to come to his defense if someone else treated him poorly.

“Chris is best characterized as an amazingly optimistic guy,” John Noel ’82 said. “He just doesn’t have down days where he’s depressed, he’s always able to see the bright side of things or just be in a great mood. He just comes with a joy, is very easy to laugh and joke around with.”

Boland not only remembers his classmates’ birthdays, he tells other friends that it’s their friends’ birthday, too. He organizes the 1982 reunions, and stays in touch with everyone in his friend group.

“He had a fun personality and a great sense of humor,” Connie Sullivan ’82 said. “A lot of the guys rallied around him and included him in activities. Their main love language at times was lovingly teasing him. He was always a good sport and would laugh right with them.”

So when one of those friends started to figure out that Boland needed help – help he would never ask for or admit he needed – a whole bunch of those classmates and friends stepped up and agreed:

“Chris needs to move back to Lincoln, and we’re going to help him do it.”

Boland was born with cerebral palsy, which limited his physical abilities – save for his strong upper body – but didn’t seem to slow down his spirit. His father John died when he was 12.

“When I was in school, I had this disability, and I was picked on some times, and kept my nose to the grindstone because I wasn’t the smartest kid in the box,” Boland said. “I did what I could. It was tough growing up and dealing with all my physical problems, and my dad passed away.”

Boland was a big sports fan, rooting for the Miami Dolphins and the Florida Gators. By himself, he moved to Gainesville, Fla., to live out his fandom. He gathered newspaper clippings of all sporting events featuring the Gators, attended many sporting events, and worked fast food and custodial jobs in between.

These were all part of his conversations with his classmates. He loved to share stories. He never complained, though he had reasons to ask for help.

And that was the part that took some listening.

“It was during one of those conversations in early 2021 I asked him his thoughts about moving back to Lincoln,” said Michael Beecham ’82. “He said in his straightforward way that he will need to come back at some point so he can be buried in the plot next to his mother. Mind you, this was not said in a thoughtful, emotional way. Just a matter-of-fact way. Well, the comment did not hit me in a matter of fact way, but rather an emotional way. I decided right then and there I was going to find a way to get Chris Boland back to Lincoln where he has family and friends he can enjoy.”

Boland had a lot of questions. The group had answers.

The idea was spreading among his classmates around the country, and they started weekly zoom calls to assess what this would entail: Money, physical labor, a network of experts in benefits Boland qualified for, community services he could receive, how to navigate bus stops in Lincoln, health care and ongoing support from his friends. The last part was easy.

Connie (Patton) Sullivan ’82 tracked it all. Donations came in through an online donations site, people volunteered to help in specific areas, like housing, transportation to appointments, whatever he needed.

“We knew our classmates would rally around Chris but had no idea how generous they would be!” Sullivan said. “Donations ranged from $50 up to several thousands from individuals. It was a huge success.”

Boland knew his friends, he knew they appreciated his friendship, but he didn’t know to what extent. When he asked how they were going to afford to do the things they were talking about, he was told, “Well, we got that taken care of.”

“Then I saw the amounts go up over five to six months, I was amazed and touched,” Boland said. “It brought me to tears a lot of times. I thought, ‘Boy, these people really care for me.’ So I’m very appreciative.”

As one side was making preparations, a question remained: Boland was so entrenched in Gainseville, would he actually come home?

“I carefully presented an idea that if he were to return to Lincoln, those phones calls could be in-person visits hence a better social life than he had in Gainesville,” Beecham said. “Friends and his family were a big reason he started to come around. Once we talked through the pros and cons of staying vs. leaving, he came around and gave me permission to investigate moving him back.”

Fritz Busch ’82 said the team of classmates had a plan ready to go, which may have helped Boland overcome any fears.

“I think laying out for him how it would get done helped to relieve some of his fears,” Busch said. “The money needed, the people, the connections all had to come together – which they did – to get the job done.”

Sorting through and packing up Boland’s belongings proved to be the most arduous of tasks. Beecham and Busch flew to Gainsville in July – the hottest, most humid part of the year in one of the hottest most humid parts of the country – spending multiple days going through his apartment and multiple storage units.

“Fritz and I would ask him if any particular periodical meant anything to him (very few did) and when it came to his belongings, there were more discussions on those,” Beecham said. “Fritz and I learned very early on to read Chris’ objections and get a feel for what was really important to him and what was not.”

At one point, while Boland and Beecham ran errands, Busch cleaned out the largest storage unit by himself in 90 minutes, Beecham said. A lot of newspaper clippings met their final fate, a blue-and-orange Gator Christmas tree was tossed, and Gator gear was everywhere.

“One funny story,” Beecham offers. “Chris kept a lot of older t-shirts well past their expiration date and sitting in a storage unit for years. We were sweating profusely as you can imagine. Fritz came up with the idea as long as were going to discard many of them, why not use them as disposable t-shirts and wear them until we sweated though them, then toss them and put on another. So now you have to picture two grown men wearing t-shirts 1-2 sizes too small for them while packing and cleaning out storage units. On more than one occasion, Chris, unaware what we were doing, would say, “Hey, I have a t-shirt just like the one you’re wearing.” It’s the little things that make you giggle while packing 10-12 hours in 100+ degree heat.”

Some of those belongings that made the cut had been with Boland since his childhood. He moved them out of his childhood home after his mom Marian passed away in 2002.

“I also kept some stuff when I was a kid, so everything that was at my mom’s house, and had them stored in Lincoln, and then moved them down to Florida,” he said. “I still kept a lot of it.”

By the end of the packing up, Beecham felt tremendous satisfaction. Sunday was traveling day.

“After all the hard work and coordination and a very long weekend in the Gainesville sun packing up Chris, we arrived at the airport on Sunday for him to fly back to Lincoln and for me to fly back to Dallas,” he said. “His flight left first and after a heartfelt hug he turned and walked down the jet way toward his new life. I got emotional and was so proud of him.”

Donations totaled more than $15,000, and were used to pay off Boland’s outstanding bills, movers, and other items Boland needed. Boland’s physical ailments put a lot of pressure on his feet, and he had shoes three sizes too small. He was overdue for dental work, never claimed workers compensation for a work-place injury, and needed laser eye surgery to help with his blurry vision. His friends helped with it all, or found someone in Lincoln ready to help.

A classmate pitched in hotel points to cover the transition time from arriving in Lincoln until his residence was ready. Another donated space for storage.

And for the first time in Boland’s life, at age 58, he signed up for disability benefits.

Busch said, “I think the reason it all came together in the end is that we were taught by our common Christian faith, that we learned from our families and re-enforced at Pius X, that ‘he who knows the good he ought to do and doesn’t do it, in this he sins’ (James 4:17). People saw a need, knew we could help and answered the call. I know there were at least three of us, but maybe there were more, that saw an opportunity to right some past wrongs as well. I think everybody was grateful that the opportunity presented itself.”

Boland’s family took notice, too. Any early jitters about the motives of this group dissolved quickly.

“We’re all in awe of what they’ve done,” said Boland’s sister, Terri Thompson ’72. “I can’t imagine … I’m just in awe, and I think it’s their upbringing, their Christian education. They saw their fellow classmate who has struggled through life and just wanted to help him. I am just in awe of how many people reached out and helped him.”

Boland would come back to Lincoln every five years for reunions, and a few other times for family events. His sister Terri and brother Michael ’69 live in Lincoln.

But this year, 2022, was different for everyone. And Boland had a big hand in making it a success.

“This year was our 40th reunion year,” Sullivan said. “It was such a special weekend due in a large part to Chris. This reunion was so important to him and he prodded us into action! It was so great to further our class of 1982 bond.”

Boland saw a lot of familiar faces, and some that he said he really hoped he would see that he hadn’t in a while.
“I saw guys that I hadn’t seen since graduation,” he said. “I gave a speech, it was heartfelt, I really did miss these guys. I had not seen some of these people in 40 years, and now I’m going to keep up with them, too.”

Boland still loves Florida, the Gators, the weather, all of it. And he still isn’t a big Husker fan. There is one place in Lincoln that still means a lot to him.

“The only thing I really loved in Lincoln – that I found out when I left – is Pius is really great!” Boland said. “I love the relationship I developed there, and the teachers and administrators that helped us become the people we are today.”