Lesiak came to Pius in fall of 1994. He served as a math teacher until 2009, when he was hired as an assistant principal. He has served the school in a variety of other capacities, including assistant volleyball and basketball coach, math/business department chair, technology coordinator, and student council sponsor. Lesiak initiated the annual alumni basketball tournament, which has become a regular tradition each March.

Pick began her work at Pius X High School in fall of 2014 as a guidance counselor. She has been in education for 25 years, including roles as a guidance counselor, dean of students, behavior interventionist, language arts teacher, and Ozanam BIST consultant. Pick holds degrees in Education Administration and Counseling. She will head the counseling department at Pius X High School and will be a member of the administrative team.

Pius X is a co-ed Catholic high school in Lincoln, Neb. The school is parochial in nature as it serves 19 parishes in and near Lincoln, providing a Catholic-based, rigorous education enriched with numerous opportunities for students to grow their faith, explore the arts, and participate in athletics and other activities. Pius X has approximately 1,200 students in grades 9-12, with more than 130 administrators, instructors, coaches and support staff employed at the school, including 15 priests and 4 religious sisters. 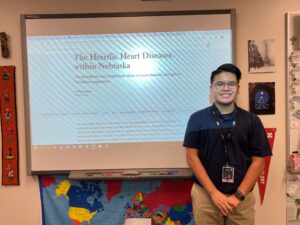 Anthony Nguyen won a state-wide competition for a GIS map he created about heart disease in Nebraska, a disease that has impacted his family. 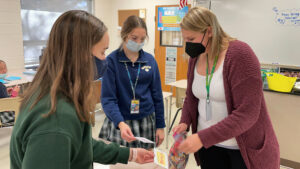 Relaying the lessons of Chemistry class

It’s relay day in Leah Zohner’s Chemistry classes, where students are given a question to answer on a laminated note card. When they are correct, 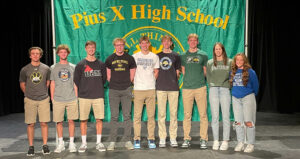