Pius X Catholic High School provides an affordable, Catholic education in a positive environment. As part of the Pius X family, students deepen their faith and knowledge and have opportunities to pursue their talents and passions. Nebraska’s largest Catholic high school, Pius X has served the Lincoln community for more than 60 years and works to instill six core values – excellence, service, purpose, faith, integrity and charity – into the next generation of leaders. 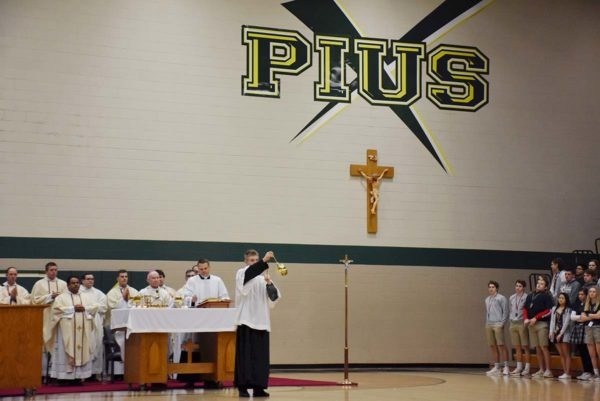 To enrich the mind, heart and soul of each student through a Christ-centered, Catholic environment that provides academic excellence and preparation to achieve a meaningful, faith-filled life.

To graduate men and women who will experience the joy of an authentic, Christ-centered life of service, in which they will use their gifts to help others know and love God.

Lincoln, the state capital of Nebraska, has an approximate population of 289,000. It is the home of the University of Nebraska-Lincoln, Nebraska Wesleyan University, Union College, Southeast Community College, and several private, vocational-technical schools. The business of the city centers around government, education, insurance, banking, technology and light industry.

Groundbreaking ceremonies were held on a 21.7 acre plot on October 23, 1955, for Pius X High School, a private, Catholic high school, to be owned and operated by the Lincoln Diocese. The school, originally built for 300 students, opened October 1, 1956, with 168 students in grades 10-12. Ninth grade students were not added until September of 1967. Read more about the history of Pius X Catholic High School.

The story of the Thunderbolt

“Since I am the sole survivor of the foursome that was responsible for the naming of the Pius X identifying mascot, The Thunderbolts, I feel it necessary to put into writing that which I have shared over the years, but only verbally.” Read the story

Giuseppe Melchiorre Sarto was born on June 2, 1835 in Riese, Italy, to Giovanni and Margherita Sarto. He was the oldest of the eight children in the Sarto family, a family of faith that had little worldly wealth. He studied at the parish school in Riese. The pastor there noticed his gifted intellect and arranged for him to receive a scholarship to attend a secondary school not far from Riese. When Giuseppe expressed his desire to study for the priesthood, his pastor and parents encouraged him and another scholarship was arranged for his seminary studies in Padua. 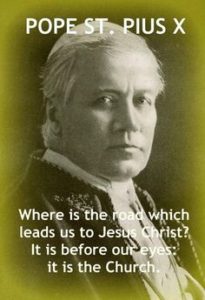 Father Sarto was ordained a priest in 1858, and later became the Bishop of Mantua (1884). Pope Leo XIII recognized the fruits of Bishop Sarto’s apostolic zeal, elevated him to Cardinal and appointed him Patriarch of Venice in 1893. Cardinal Sarto was elected to be the Pope in 1903, and chose the name Pius X. His Holiness took seriously his motto: “to restore all things in Christ” (Eph. 1:10). Pope Pius X battled the errors of modernism, reformed Church music, and started the codification of Canon Law. His ardent love for the Blessed Sacrament was manifested in his encouragement of the frequent reception of Holy Communion and his decree allowing children to receive their first Communion at the age of reason. Saint Pius X is frequently called the “Pope of the Eucharist.”

The inscription on his tomb in the crypt of the basilica of St. Peter’s gives the most eloquent testimony to a life spent in the service of God. It reads:

Born poor and humble of heart,

Undaunted champion of the Catholic faith,

Zealous to restore all things in Christ,

Crowned a holy life with a holy death.

Fight, Fight you mighty Pius Team
Fight for Pius High
Thunderbolts crash through to win
like lightning from the sky