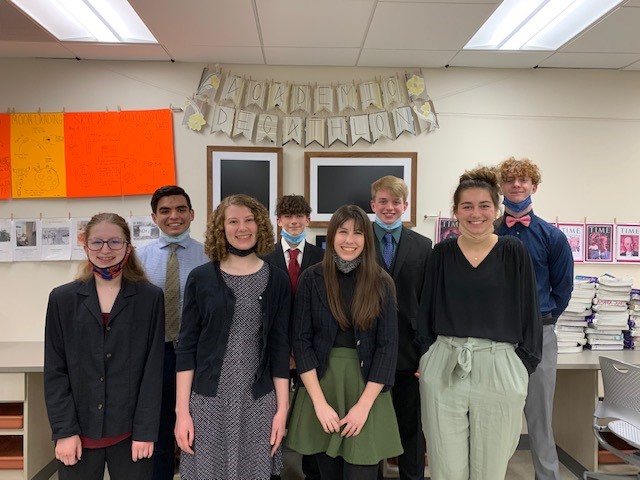 Clare Oldenburg won this year’s state AcaDeca individual championship, making her the first Nebraskan to win the title twice in a row! The Pius X team finished as state runners-up!

Oldenburg, a senior, earned a perfect score and gold in the Music category, and won gold in Art History, Science, and Interview; silver in Language & Literature; and bronze in Economics.

The entire season was conducted virtually.

Academic Decathlon is an accelerated and intensive year-long course of study in science, social studies, math, English (literature, critical reading, and writing), art, music, speech and economics. A new theme focuses the study each year, so a student may take this course more than once. Students are encouraged to participate in at least one scrimmage the first semester. A select group of twelve students will compete in Regional, and if successful, State, and possibly National Competitions. Because students in Academic Decathlon must come from three academic levels (A, B, and C or below) as determined by selected portions of their GPA, students of varying ability and grade will be in class together. Grading standards for this course are adjusted for grade and ability. Summer reading is encouraged.

Pius X won the State Championship in the Academic Decathlon, the school’s second straight title. The state event was held Friday and Saturday at the University of Nebraska-Omaha. Read more