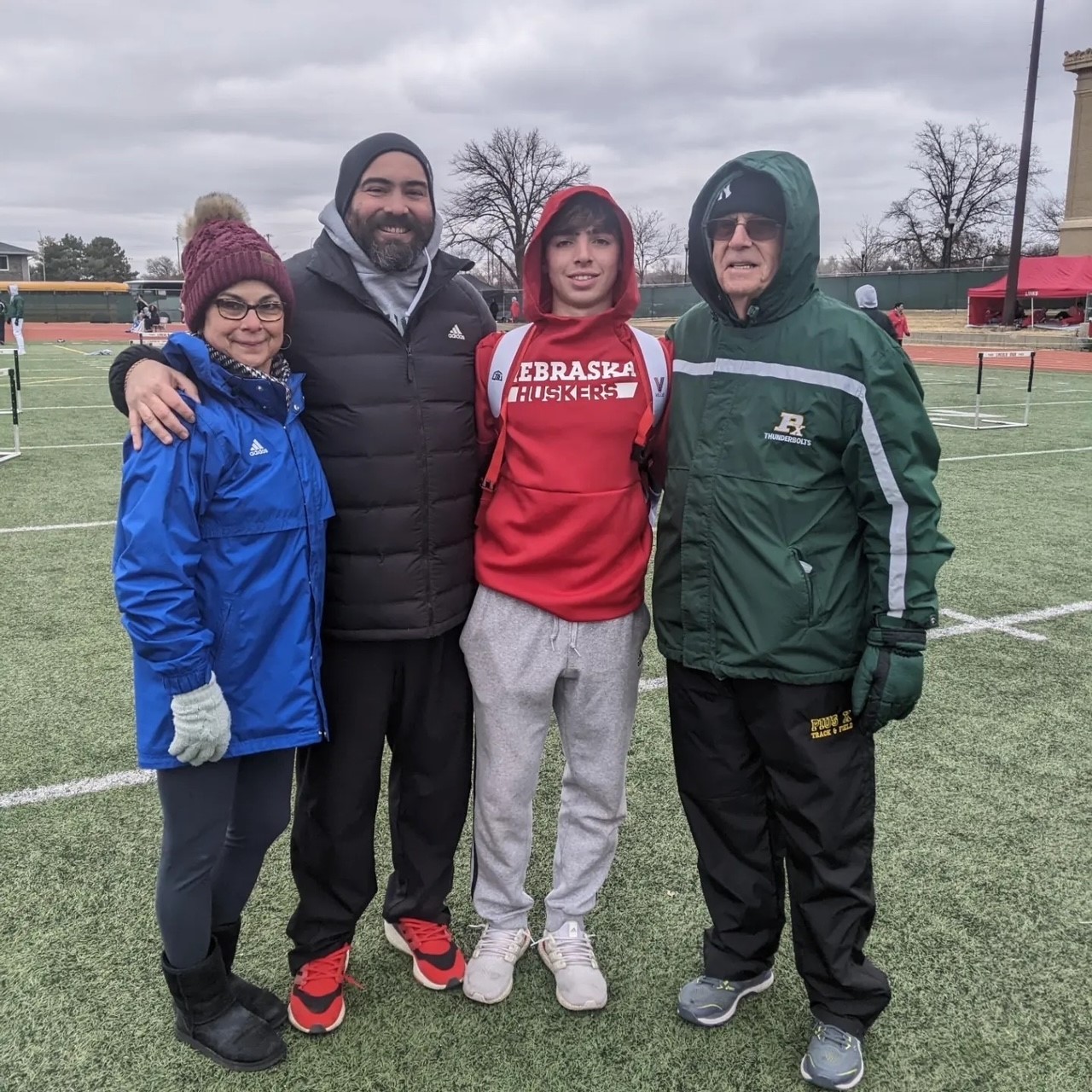 The Grosserode name has been all over the track and field record boards at Pius X High School. Thanks to the latest addition, three generations of the family now appear.

In 1977, Joann Hegler ’78 (now Grosserode) and a teammate were clocked with the exact same time in the 100-meter dash, and today still share the school record. (She also set another record that has since been bested.)

And this past spring, her oldest grandson and then-sophomore Reece tripled-jumped his way into the record books, and would wind up breaking that mark a few more times this season on his way to a state runner-up finish. (Reece is technically the Class A state record holder, too, in a rare situation where the event champion’s wind-aided jump counts for the competition but not for the record.)

“John and I just tried to instill in them, ‘You work hard and you put in the work and the results will come. Say your prayers, know these are gifts from God and just work on those gifts. We knew the records were there and it was exciting, but we also said you have to put in the work.”

Another son, Mitch ’16, is also on the record board in two relay events.

The success is a testament to a family of natural athletes who pride themselves in working hard to get the most of their God-given talents. The parents, Joann and the late John, always prioritized the work.

“John and I just tried to instill in them, ‘You work hard and you put in the work and the results will come. Say your prayers, know these are gifts from God and just work on those gifts’,” Joann said. “We knew the records were there and it was exciting, but we also said you have to put in the work.”

The work for PJ, now an assistant track and field coach at Pius X, was actually targeted for state records and meet championships.

“My goal was to break the all class record in my first outdoor meet,” he said. “I was lucky to get a nice day and knew I would do it because of how I had been running indoor. The end goal was much bigger than my first state record. The end goals were always bigger than the records. All six school records really didn’t set in until I saw them on the board the next season.”

As a track coach and dad to Reece, he has first-hand look at his son’s training. That involves understanding that not every jump will be the best jump, and that each day’s training won’t always translate to a new record or goal immediately.

“We play the long game,” he said. “Our training starts in October and ends on July 1. Everything comes in small waves and this goal (the school record) was next on the list … He has learned to be very patient and trust the process.”

Reece’s first record-breaking day came early in the season. His next goal was to go over 48 feet, which he did at a later meet. He has the second-best sophomore triple jump mark in the nation (19th for all high schoolers), and finished 7th in the triple jump at Nike Outdoor Nationals this summer.

His fan club clued him in that his first record-breaking jump had just taken place earlier this spring.

“I knew it happened because right after my landing everyone was screaming and cheering,” he said. “After that I knew something big had happened.”

The family success has had at least one positive impact on Reece that will serve him well beyond track and field, but especially in track and field: “It has made me work harder and try to be as good as my family has in the past.”

For Joann, the track meets take on a different feel than when she was setting records.

“It’s so different because it’s just as exciting but I don’t get as nervous,” Joann said. “When my kids were competing, I was just shaking. With Reece, I’m just calm and he’s a really calm kid, too.

Art From the Classrooms

The Heart Of It

Give to Pius X Day

Thank you to our scholarship supporters!

Oh Brother! Record passes from one Mattern to another

Family Traditions: Alumni with graduates in Class of 2022